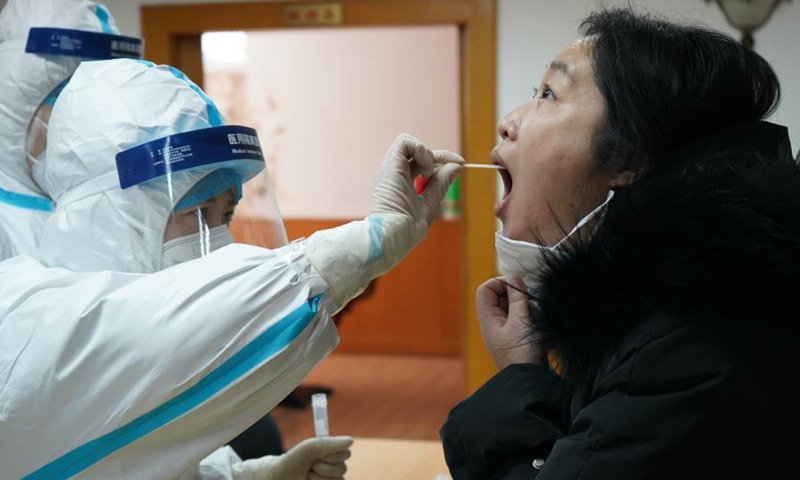 A medical worker collects a swab sample from a resident at a community in Yuhua district of Shijiazhuang, capital of North China’s Hebei Province, Jan. 7, 2021. Photo: Xinhua

A company hired to process COVID-19 nucleic acid tests in Longyao county of Xingtai, North China’s Hebei Province, reported samples from a mass testing of hundreds of thousands of local residents had all produced negative results, when it had not even completed testing of all samples, several of which included positive results. Police detained the person in charge of the company on Sunday.

Jinan Huaxi Medical Laboratory was in charge of processing some 310,000 swab samples for nucleic acid tests in Longyao county, in central Xingtai. The county reported two new COVID-19 cases and one asymptomatic case on Sunday, after discovering the lab had not actually finalized screening all the samples it had received.

After the county reported the three new cases, it also imposed highly strict epidemic control measures including demanding all the residents undergo home quarantine, setting up checkpoints to control incoming arrivals, according to a statement issued by the local government on Sunday.

From Tuesday to Wednesday, the county had conducted 314,987 coronavirus tests and the person in charge of the medical lab, surnamed Zhai, reported on Thursday all produced negative results. However, local health commission learned from Zhai later that one set of samples had not been tested.

Local police and health authorities are now looking into the case of falsifying the epidemic data and the county is scheduled to conduct the third round of massive nucleic tests starting Monday.

Xingtai is one of the three locked down cities in Hebei that are home to more than 22 million people, double the number of people in Wuhan that were put under lockdown during epidemic last winter.

Chinese authorities have emphasized the accuracy and authenticity of the testing data, which is considered a crucial factor in epidemic prevention and control work and anyone who deliberately conceals data will bear legal consequences.

Qian Sanxiong, Party chief of Xingtai inspected the epidemic prevention and control work in Longyao county on Sunday, urging the elimination of the virus at the early stage of the outbreak. After local authorities re-examined the untested samples, local authorities sealed off a residential area involving 19 households and 58 residents, and reported the case to the local police.

Student teams to compete on WPSU’s ‘The Investment’