It is unusual, to say the least, to see a top-10 market cap cryptocurrency double in value in days, however, XRP did indeed pull off this feat. In fact, XRP went parabolic in recent days, one of the most sought-after patterns by traders. On the contrary, Synthetix tested its resistance level, but it was unable to climb past the same in the face of immense selling pressure. Finally, Crypto.com Coin halted its downtrend and could see a period of consolidation in the near-term. 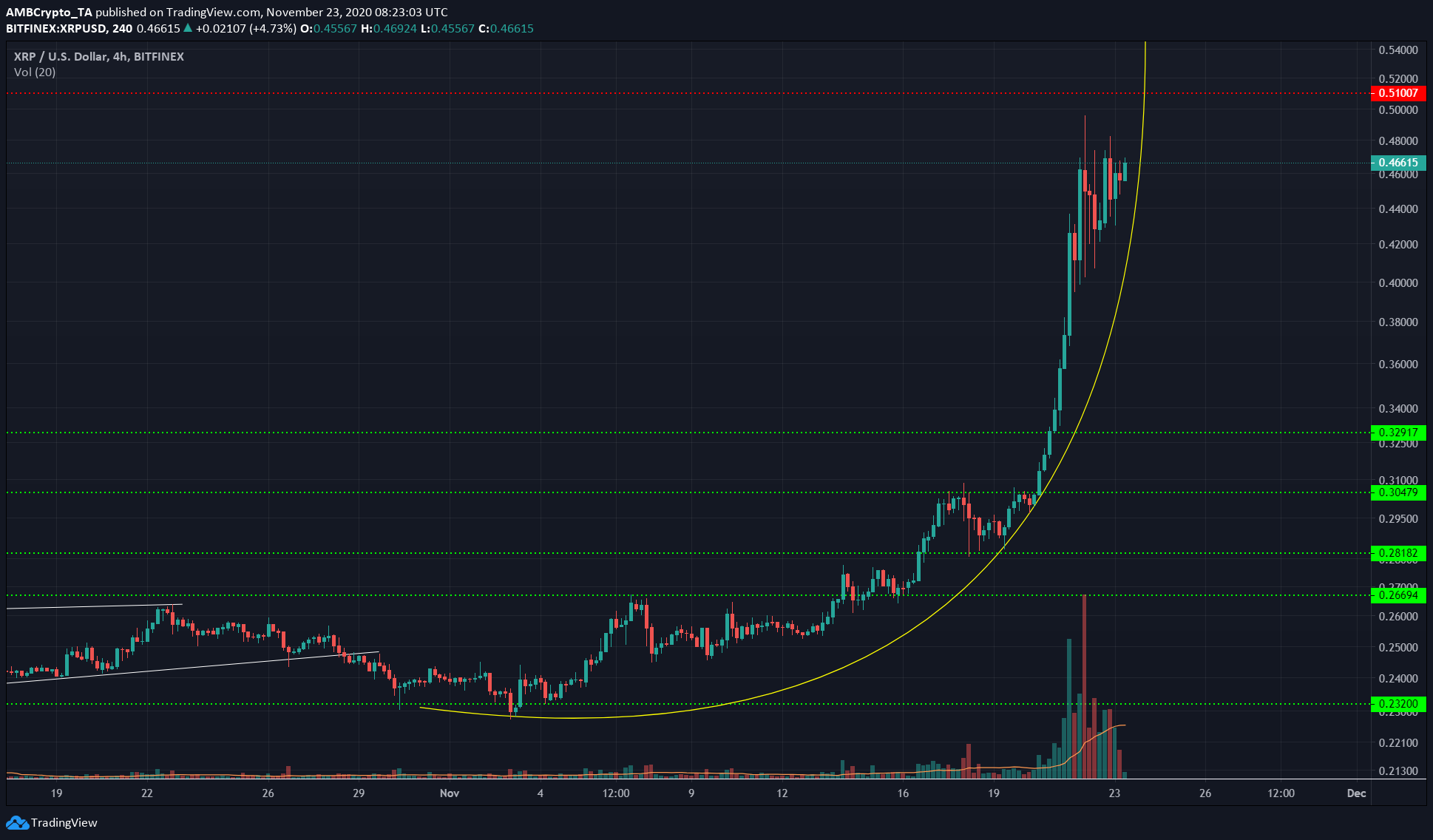 As has been highlighted, XRP went parabolic a few days ago. The cryptocurrency’s price doubled from $0.23 to $0.46 in the span of three weeks, with most of the gains being made over the past week.

In fact, the crypto’s price spiked as high as $0.49, but it faced a lot of selling pressure. There was a psychological resistance level at $0.5 and another level of resistance at $0.51.

While XRP traders would be euphoric following such a ride and expect further gains, caution may be advisable. Since the price hit $0.46 and saw a tail wick as low as $0.4, the trading volume has been falling, while the price had stagnated at $0.46.

Another price hike for XRP should be backed by heavy trading volume, or there is a likelihood that bears and take-profit traders would eventually push the price to as low as $0.35 in the coming days. 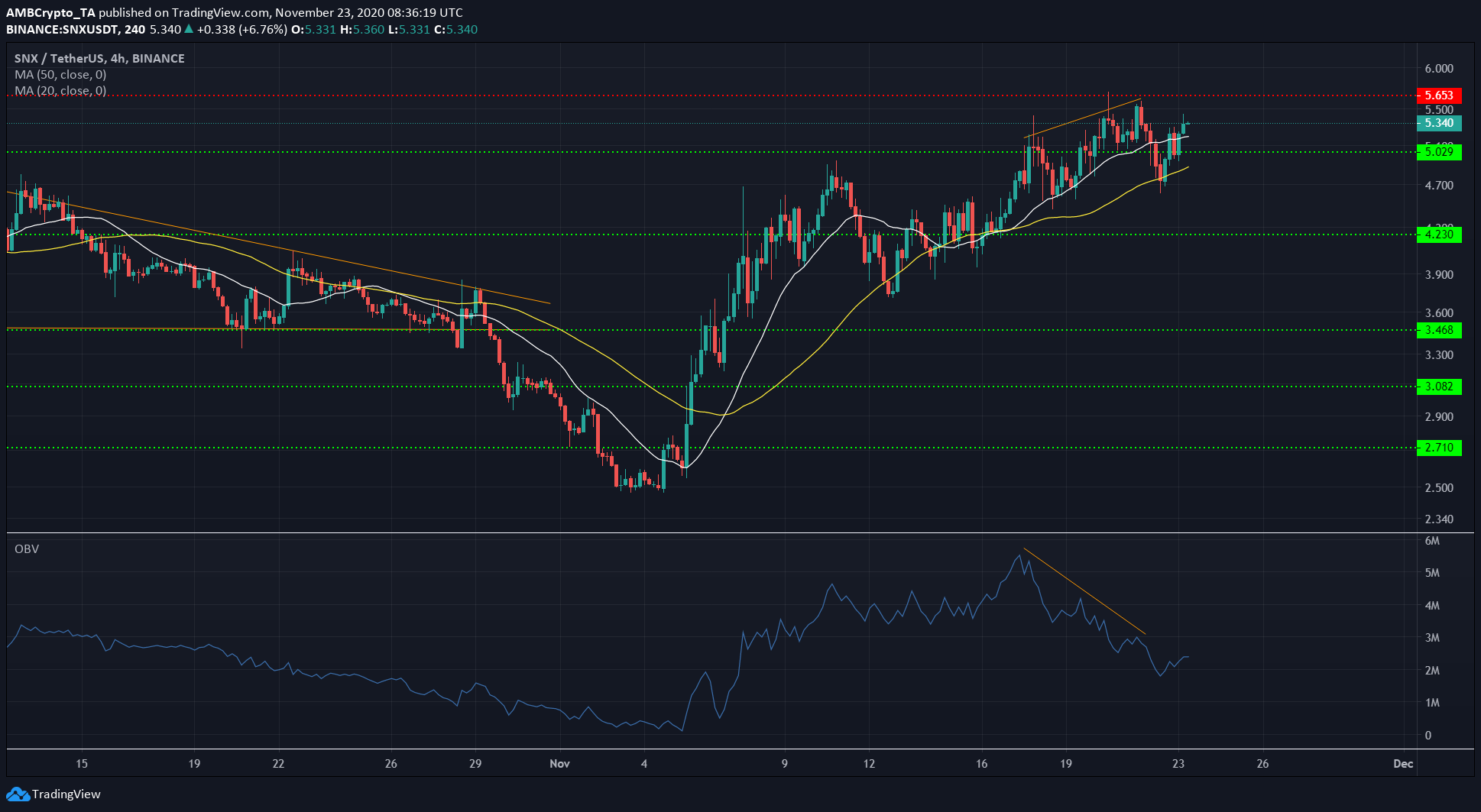 SNX tested the resistance level at $5.6 over the past few days, but it was unable to climb past the same in the face of selling pressure.

The OBV showed falling buying volumes even as the price rose. This bearish divergence between the price and the volume saw SNX drop from $5.6 to test the support at $5, before a strong bounce to $5.34.

The 20-period moving average (white) was moving above the 50 SMA (yellow) to highlight recent bullish momentum. The moving averages can also be expected to act as support for the price in the coming days.

And yet, unless the OBV sees a surge to the upside to point towards a wave of new buyers, SNX could see a drop below the $5-support level. 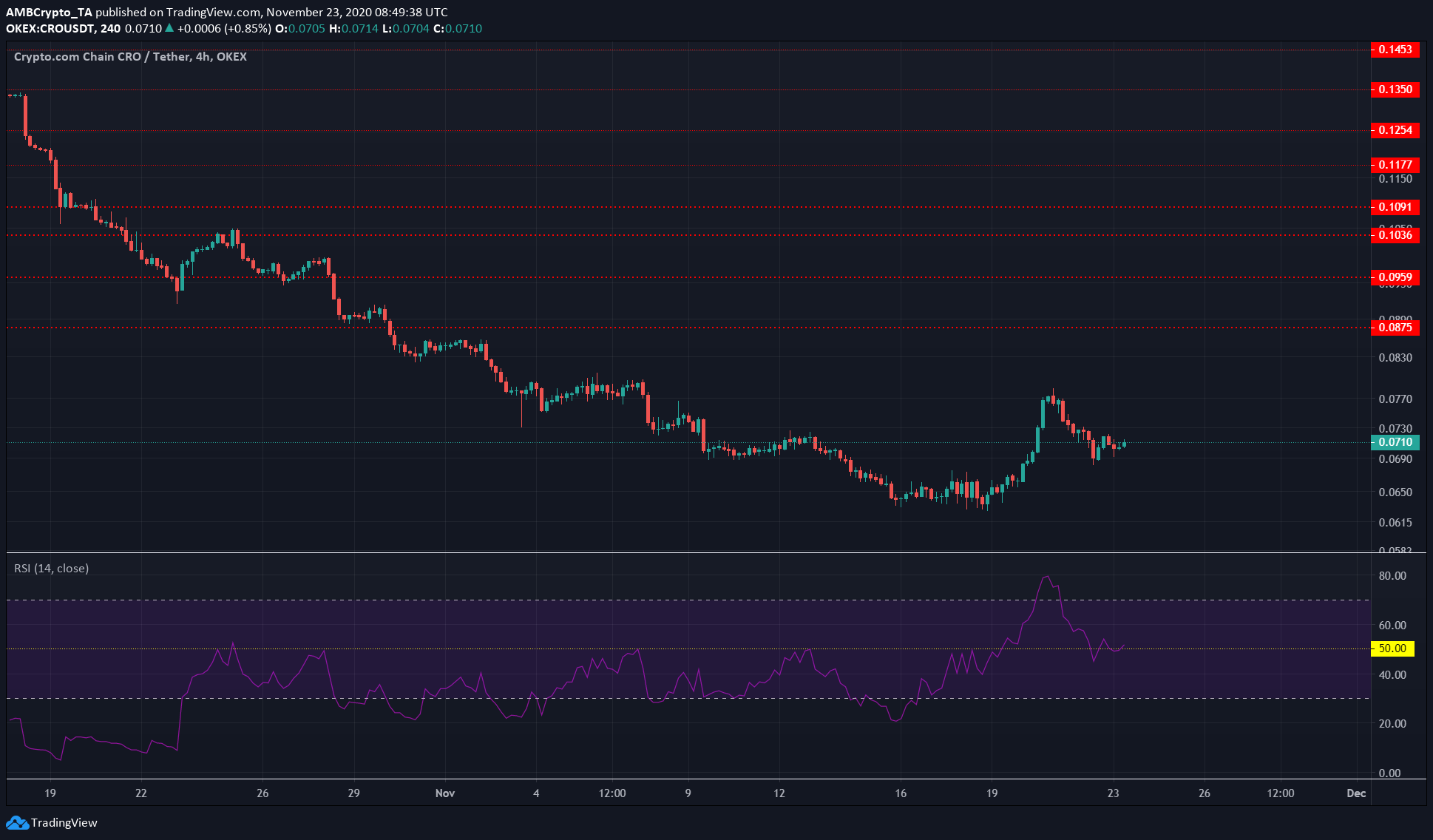 Crypto.com Coin appeared to have stalled its previous downtrend, without actually reversing it. It saw a bounce from $0.0636 to $0.077 and was trading at $0.071, at press time.

Until a while back, the RSI was well under 50 for a span of a few weeks. If the RSI continues to oscillate around that level, a period of consolidation for the token would be in store. At the time of writing, it underlined neutral momentum.