Gold consolidates Friday’s steep drop to $2015, as the upside attempts remain capped by the US fiscal impasse and lingering US-China tensions. The risk-averse market conditions could put a fresh bid under the US dollar, as it struggles to extend Friday’s correction.

The yellow metal corrected sharply from the record highs of $2075 last Friday, courtesy of the upbeat US NFP figures and US-China tech war escalation. Let’s take a look at how gold is positioned technically.

The tool shows that the bright metal face strong upside hurdle around $2032, which the convergence of the Fibonacci 38.2% one-week, SMA5 on four-hour and SMA100 on one-hour.

Above that level, the XAU bulls will retest the daily highs of $2036. The next resistance awaits at $2039, where the Bollinger Band one-hour Middle and Fibonacci 23.6% one-day coincide.

Further north, minor resistances en route the next key barrier at $2048 will be tested. The latter is the Fibonacci 23.6% one-week.

The corrective bias will likely remain intact as long as the price holds below the critical resistance at $2054, the pivot point one-month R1.

Sellers will then target the $2009 demand area, which is the pivot point one-day R1. The bears need to take out the $2005 support (Fibonacci 61.8% one-week) to extend the recent downside bias.

Here is how it looks on the tool 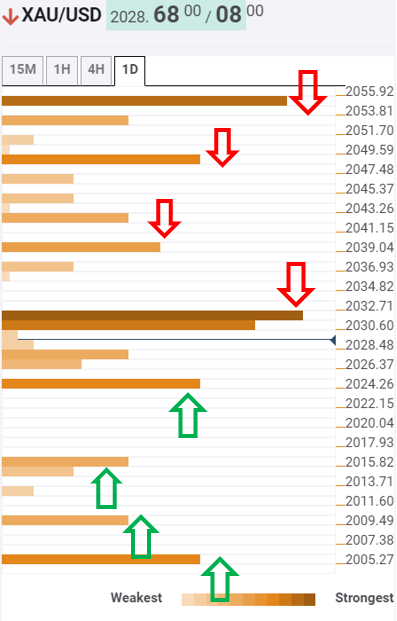 About the Confluence Detector

The TCI (Technical Confluences Indicator) is a tool to locate and point out those price levels where there is a congestion of indicators, moving averages, Fibonacci levels, Pivot Points, etc. Knowing where these congestion points are located is very useful for the trader, and can be used as a basis for different strategies.

AFib Less Deadly Than It Used To Be; Anger and HF

Treatment, Access to Caregivers Among Factors Affecting QoL in MM