Following a robust end to the second quarter, Gold keeps its shine starting out the third quarter, trading close to the highest level since October 2010. A test of the key $1800 mark looks inevitable, as Gold futures on Comex have already scaled that level.

As observed in the Technical Confluences Indicator, the bulls are likely to face stiff resistance around $1786, the confluence of the previous day high and pivot point one-week Resistance 1.

Acceptance above the latter will see the next hurdle at $1789 at risk, where pivot point one-day Resistance 1 and Bollinger Band one-day Upper intersect. A test of the $1800 mark is inevitable on clearance of the above two resistance levels.

To the downside, healthy support at $1777 is likely to keep the buyers hopeful in the near-term. The SMA 5 on four-chart, Bollinger Band one-hour Middle and Fibonacci 38.2% one-day converge at the aforesaid level.

A cluster of minor support levels is seen between $1767-64, which is likely to offer fresh strength to the bulls, in order to take on the upside once again.

Here is how it looks on the tool 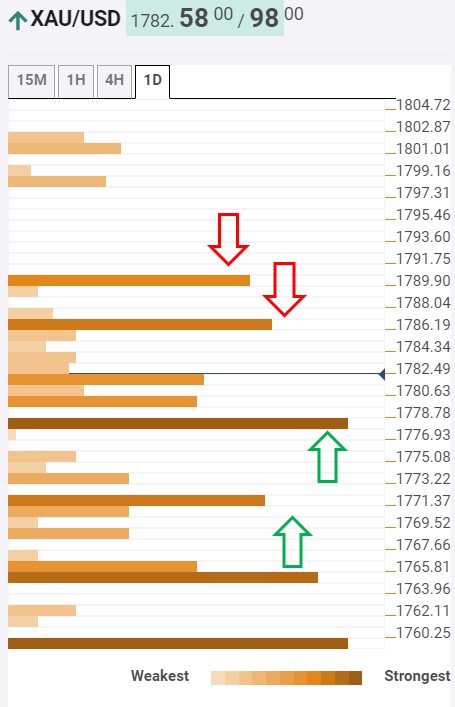 The Confluence Detector finds exciting opportunities using Technical Confluences. The TC is a tool to locate and point out those price levels where there is a congestion of indicators, moving averages, Fibonacci levels, Pivot Points, etc. Knowing where these congestion points are located is very useful for the trader, and can be used as a basis for different strategies.

This tool assigns a certain amount of “weight” to each indicator, and this “weight” can influence adjacents price levels. These weightings mean that one price level without any indicator or moving average but under the influence of two “strongly weighted” levels accumulate more resistance than their neighbors. In these cases, the tool signals resistance in apparently empty areas.

The Three Most Controversial Bitcoin Price Models and What They Predict

BTC/USD retesting a critical daily support which must hold