The economic downturn caused by the COVID-19 outbreak has been unsparing in its impact on the U.S. labor market. The number of employed workers fell by 24.7 million from February to April 2020 as the outbreak shuttered many parts of the economy. With the easing of government-mandated closures in recent weeks, employment picked up by 4.1 million from April to May. But overall, job losses remain sizable, with employment decreasing by 20.6 million (or 13%) from February to May. The downturn has affected some Americans more than others, particularly Hispanic women, immigrants, young adults and those with less education.

The decrease in employment in the first three months of the COVID-19 recession is more than double the decrease effected by the Great Recession over two years. From the end of 2007 to the end of 2009, U.S. employment fell by 8.0 million, or 5%. In addition, the impact of the COVID-19 recession on several groups of workers varies notably from their experiences in the Great Recession, according to a new Pew Research Center analysis of government data.

While many American workers are hopeful they will get their old jobs back, analysts are unsure of the depth of the recession and the shape of the recovery that may follow. Here are five facts about how the employment of American workers is being affected by the COVID-19 downturn.

The COVID-19 recession, barely three months old, has had a sharp and severe impact on the employment of American workers. This report focuses on how the downturn affected the employment of major demographic groups of workers.

Most estimates of employment in this report are from the U.S. Bureau of Labor Statistics, based on its survey of households, the Current Population Survey (CPS). The CPS is the government’s official source for monthly estimates of unemployment. Additional estimates, specifically those for racial, ethnic and nativity groups in the Great Recession, are based on the analysis of CPS data by Pew Research Center. These estimates are adjusted to account for the effects of annual revisions to the CPS. All estimates are nonseasonally adjusted because seasonal adjustment factors are not available for many of the demographic groups included in this report.

The COVID-19 outbreak has affected data collection efforts by the U.S. government in its surveys, especially limiting in-person data collection. This resulted in about a 10 percentage point decrease in the response rate for the CPS in March and April 2020 compared with preceding months and an even greater decrease in May 2020. It is possible that some measures of employment and its demographic composition are affected by these changes in data collection. 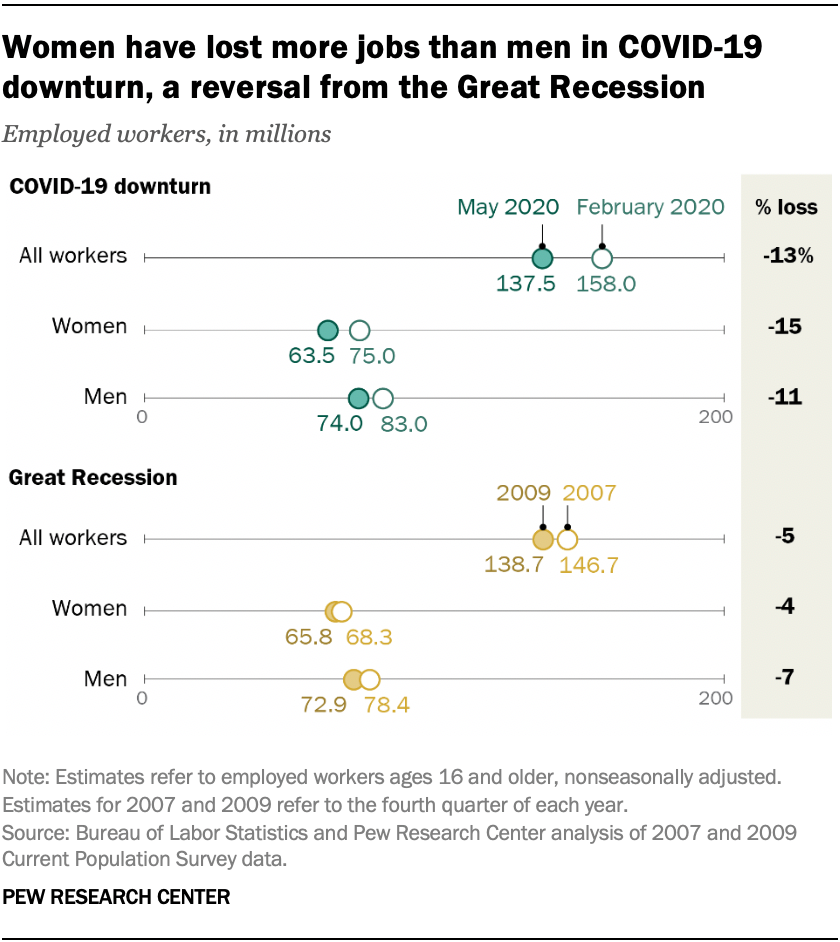 1More women than men lost their jobs from February to May, 11.5 million vs. 9.0 million. In sharp contrast, men lost more than twice as many jobs as women in the Great Recession from 2007 to 2009, 5.5 million vs. 2.5 million. Indeed, the COVID-19 downturn is the first of eight downturns in the past five decades in which women have lost more jobs than men.

Rooted in the coronavirus outbreak, job losses in the latest recession have been concentrated in sectors in which social distancing of workers is difficult or the option to telework is lacking. Just three sectors – leisure and hospitality, education and health services, and retail trade – accounted for 59% of the total loss in nonfarm jobs from February to May. These sectors also accounted for 47% of jobs held by women in February, compared with 28% for men, exposing women to a higher risk of unemployment in recent months. Historically, job losses in recessions, including the Great Recession, have centered around goods-producing sectors, such as manufacturing and construction, in which men have a greater presence. 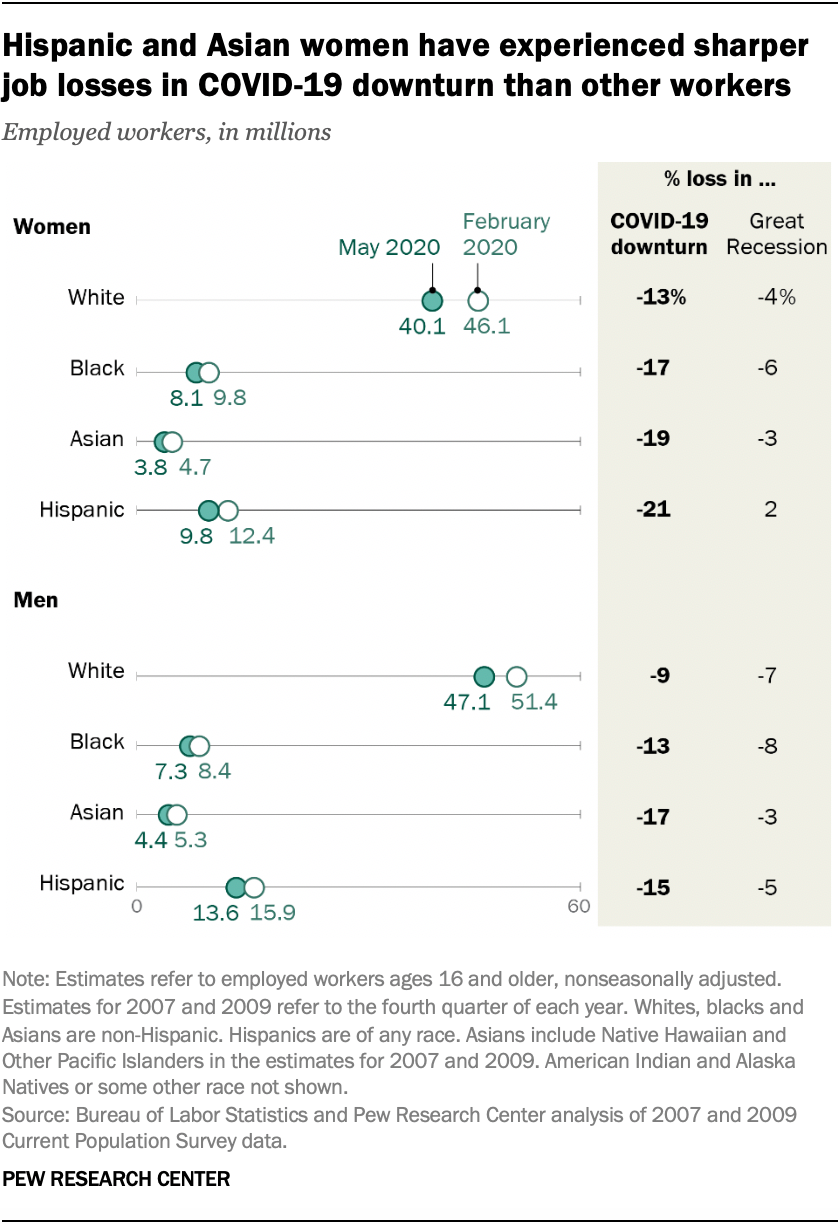 Among men, Asian (-17%), Hispanic (-15%) and black (-13%) workers have experienced a greater loss than white (-9%) workers in the COVID-19 recession. The pattern among men also contrasts with the Great Recession, when the rate of job loss among white and black workers was steeper than among Asian and Hispanic workers. 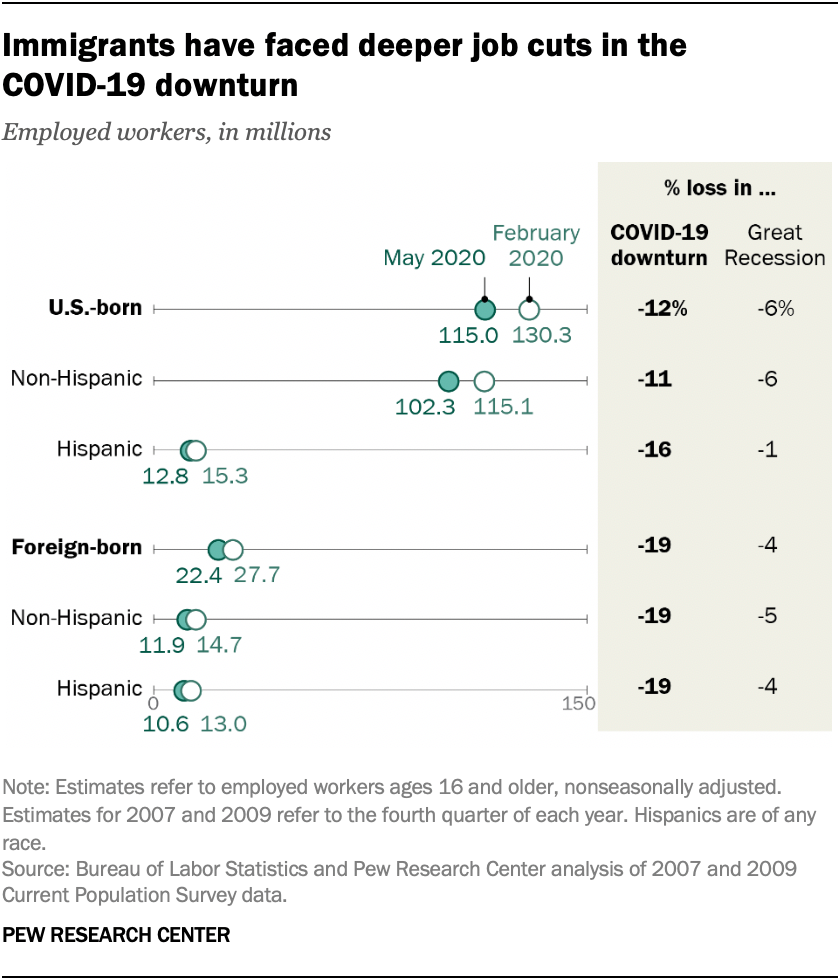 3Employment among immigrant workers has decreased more sharply than among U.S.-born workers in the COVID-19 recession, a 19% drop compared with 12%. In the Great Recession, immigrants lost jobs at a slightly slower pace than U.S.-born workers.

Among the U.S. born, Hispanic workers were more likely than non-Hispanic workers to have lost jobs from February to May. Among the foreign born, employment losses have been equally sharp for Hispanic and non-Hispanic workers, -19% for each group. Hispanics overall are relatively young and less likely to have graduated from college, two factors that put them at a higher risk of unemployment in economic downturns. Also, 44% of Hispanic immigrants in the workforce are estimated to have been unauthorized in 2016, which also likely made them more vulnerable to job cuts. The trends in employment among Hispanic workers are echoed in a Pew Research Center survey conducted April 29-May 5 in which Hispanic adults were more likely than American adults overall to say they have taken a pay cut or lost their job because of the coronavirus outbreak. 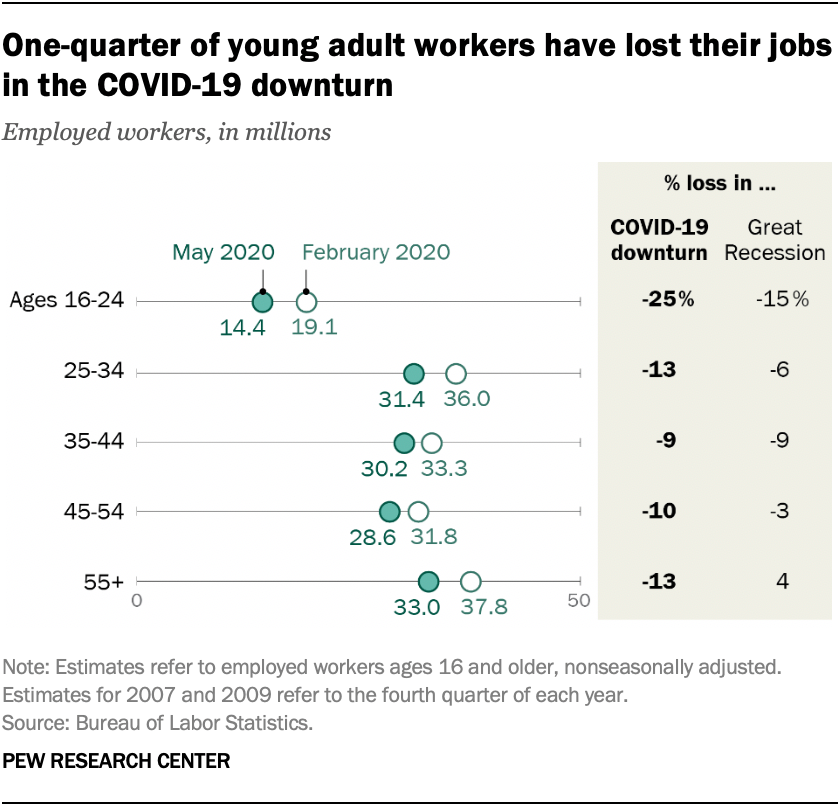 4The employment of young adult workers ages 16 to 24 has been severely impacted by the COVID-19 downturn, with one-quarter of them losing their jobs from February to May. A key contributing factor is that nearly half of young adult workers (48%) were employed in higher-risk industries in February, compared with 24% of workers overall. Job losses for older workers were also sizable, ranging from 9% to 13%, but less severe than for young adults. The pattern of job losses by age in the COVID-19 recession is generally consistent with the pattern in the Great Recession and in previous recessions. In a Pew Research Center survey conducted April 29-May 5 young adults ages 18 to 29 were also more likely than older Americans to say that they have lost a job or taken a pay cut because of the coronavirus outbreak.

Notably, 4.8 million adults ages 55 and older, nearing the traditional retirement age, have lost their jobs in recent months. The experience of workers 55 and older in the COVID-19 recession is the opposite of their experience during the Great Recession, when their employment increased 4% from 2007 to 2009. One factor in the increase in employment among older workers in the Great Recession was their rising labor force participation prior to the recession, from 30% in 1995 to 40% in 2009, adding to their numbers in the workforce even amid a recession. 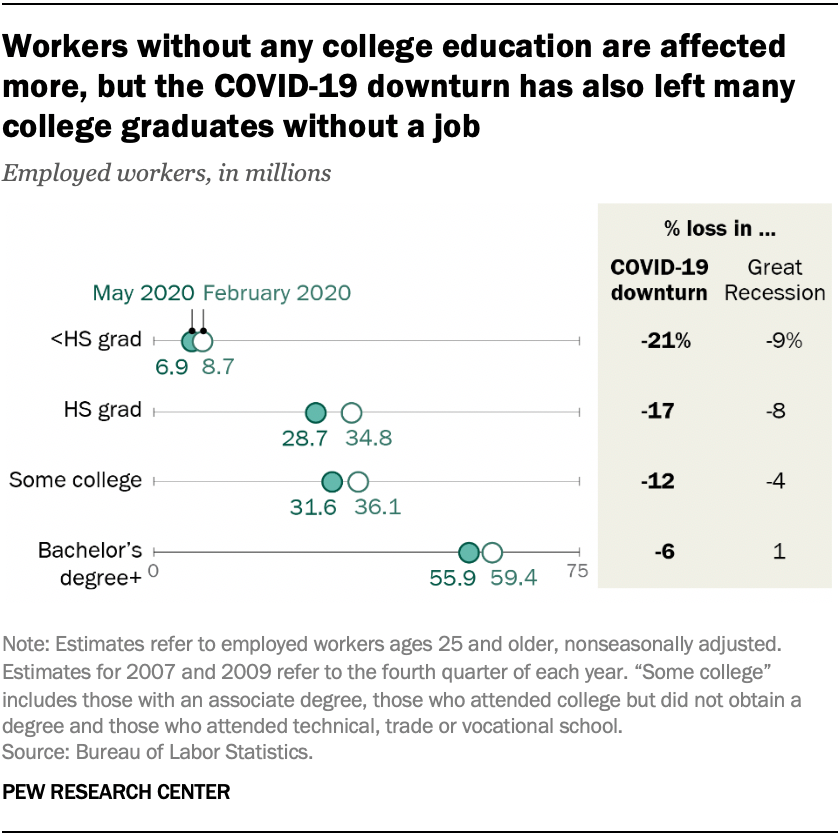 One difference between the COVID-19 recession and past recessions is in the significance of teleworking in saving jobs at the moment. Workers with a college degree or higher education are much more likely to have the option to telework – 62% could in February compared with 22% of high school graduates who did not go to college, for example. While this helped limit job losses for college graduates from February to May, their experience in the Great Recession was different – their employment was virtually unchanged from 2007 to 2009.