Women living in find distributed kits sans sanitary pads, are forced to use cloth; doctors and nursing staffers say there are no places to change while in cycle. PMC commissioner assures remedies for both

While COVID-19 does not differentiate between genders, when it comes to fighting the , the approach of the authorities seems skewed towards males. Now, female nursing staffers working in the containment areas of Pune have claimed that women staying in these hotspots are finding it immensely difficult to procure menstrual hygiene products. This is because the authorities — who have shut down all shops to prevent spread of the infection — have provided ration kits to them minus sanitary pads, forcing thousands of women to use cloth during their periods.

Further, this problem is not just contained to sealed-off areas. Even the female nursing staffers themselves who are working in these areas for the past two months are facing issues procuring sanitary pads, as the does not seem to have deemed them as an essential commodity.

The appalling development comes at a time when the Bombay High Court is already dealing with a petition filed by two law students against both the state and central governments, asking for the declaration of sanitary napkins as an essential commodity, so as to regularise their supply and safeguard the health of millions of women, especially impoverished ones, during the lockdown. 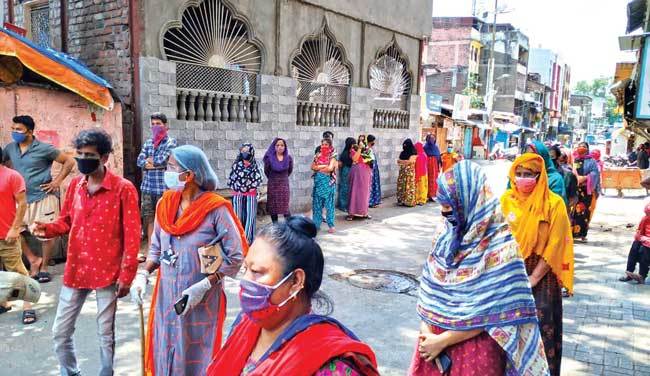 Most shops are shut in hotspot areas, limiting access to products for menstrual hygiene; the female health staff have to go all the way to the ward office to change pads each time

Speaking on condition of anonymity, one of the nurses who is on COVID-19 duty in the worstaffected area of Bhavani Peth, said, “It has been over eight weeks now that we are working on this special duty and the civic administration has provided enough () kits for all doctors and nursing staff. However, it seems that the administration gave no thought to the menstrual cycles of female doctors and nurses during preparations. We have neither been provided sanitary pads, nor are there any arrangements for women on duty to change their pads.”

These female frontline workers spend hours on field in containment areas, but are left hunting for a secure spot to change and dispose their pads when menstruating. “With no option, most women travel all the way to the nearest ward office to change their pads and go back on field. This needs to be done multiple times a day, depending on flow for each person. This is the kind of roundabout we have been sent on for the last two months,” said a nurse.

Some of these women assist doctors in checking people for COVID-19, while others go door to door for surveys in containment zones. While speaking to residents of the said areas, they found that the issue of lack of supply of menstrual products is quite a major problem. “During the survey of women about their health issues, many of them told us that they are unable to purchase sanitary pads as most shops in containment zones are shut, including chemists. They also told us that while the civic body distributed ration kits to address the food issue, there was no supply of sanitary napkins, forcing many to go back to the traditional method of using cloth during their periods — something that health workers have been discouraging due to related health and hygiene issues for years now,” another nurse recounted.

For some sections of society, speaking about menstruation and its related issues remains a taboo. Thanks to this, many women are also not stepping out amidst police protection to buy sanitary pads.

A female nursing staffer assigned to survey added, “Some of the women, especially in slum areas, shared that whenever they step out, they are questioned by police deployed in their areas about the reason for coming out of the house — but, they feel uncomfortable to tell male cops about the need to purchase intimate hygiene products. So, they said they just return home, embarrassed.”

In the fight against , several women activists also feel that the administration needs to develop sensitivity towards the issues of a gender at the forefront of this battle, too. On the same note, women’s rights activist Kiran Moghe said, “The lack of sensitivity towards the genuine issues of women is the problem with the administration. Today, we see that a majority of nursing staff and accredited social health activist (Asha) workers are women, working tirelessly to fight the outbreak. But when it comes to their own health safety, the administration is ignorant and lax. Even today, speaking about menstrual cycles and sanitary pads is considered a taboo. I feel that women should come forward and start speaking up about this, and demand that the government fulfill their needs, like ensuring a steady and seamless supply of menstrual health products.”

When contacted on the development, (PMC) commissioner Shekhar Gaikwad admitted, “It is a genuine issue, and I will take this up on priority. I will ensure that the supply of sanitary pads is provided in containment areas and also make the requisite arrangements for female nursing staff working in containment zones.”

Thomas Kolster on how to avoid the hero trap [interview] • MarkLives.com