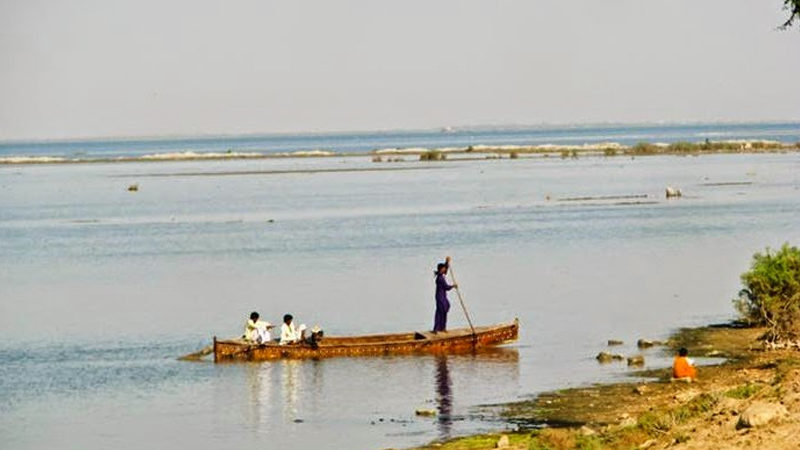 This lake is one of the biggest natural lakes located in Dadu and Jamshoro districts in Sindh province and its area comprising on 270 square kilometres. According to Dr Asgar Mahesar, Manchar Lake has three major sources of fresh water supplying, one from Indus water, second hill torrents and third RBOD-1/MND.

In his research survey, Dr Asgar Mahisar said that water supply from Indus River has been reduced due to divergence water for agriculture practice and municipalities through construction of hydrological structures and morphological changes in bed of Indus River and Manchar Lake also hill torrents due to climate change.

He highlighted that there is only single polluted source of water supplying to lake through RBOD-1/ locally called as MNVD-Main Nara Valley Drain.

Survey said that Present time MNVD is not only receiving agriculture waste water but also combined industrial and municipal waste water of upper Sindh and Balochistan from its catchments area. Simultaneously use of poisonous chemical for fishing has further contaminated lake water.

In survey, Dr Mahesar said that about 4000 cusecs waste water generating from the catchment area of RBOD has directly been discharged in to Manchar Lake through RBOD/MNVD. The releasing of polluted water through RBOD-I.MNVD has damaged over all eco-system of lake and caused negative impact on bio diversity, humanity and livelihood of locals which pushes local people to migrate other places.

Survey further said that from ecological perspective, this lake was rich source for variety of fauna and flora. The Siberian birds frequently visited this bird in winter season but current time, left this lake due to poor ecological condition.

He said that Manchar Lake is exclusively known as floating village where in fisher house hold resides with families and boat number is 1000 but present their living standard is in miserable condition because almost all survival source has been diminished.

Discussing the Impact on local people’s health, in survey Dr Asgar Mahesar said that the consumption of degraded water of Manchar Lake and MNVD by the locals who live in a boat villages and surrounded the lake are affected, the endemic water born disease including malaria, gastro, Hepatitis A, B, C, Typhoid fever and TB.

He said that the Fish species include Gandan, Thali, Roha, black Rahoa, Jarko, Morakho , Khago, were available before contaminated lake. Hence a fish catch is reduced from tons to Kg per day and average catch by individual was 30 to 40 kilograms per person 1970 but now an average is limited by individual 4 to 5 kg per day from Manchar Lake.

According to survey of Dr Asgar Mahesar that the estimated water supply quantity is 0.899 million acre feet from the sources such as Indus River, hill torrents, Kheer Thar Ranges and MNVD but these supply sources are gradually reducing which may convert biggest lake into small pond.

Suggesting, the rehabilitation of Manchar Lake, Dr Mahesar said that Manchar Lake, plan should be developed through an integrated water resource management under Sindh Irrigation department and for permanent supply from enhance capacity of right side canals of Sukkur Barrage and construction of weir at Indus River near Sehwan for diverting water to make reservoir with complex Hamal and Manchar Lake.