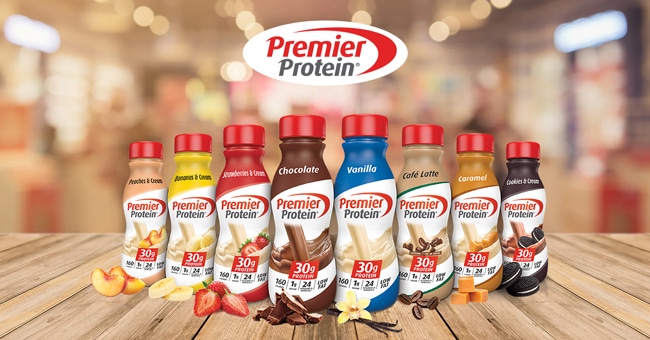 Premier Protein is gearing up for what it hopes could be its biggest year yet as the ready-to-drink protein shake brand looks to expand its audience and drive growth with more than just “fan evangelism.” The brand kicked off the year with the launch of a new marketing campaign (including its first-ever TV spot) to support its protein shake product line and will be rolling out a slate of new products to retailers in the coming months.

The recent efforts to grow the business come after major changes for the company last year. Post Holdings, which first acquired Premier Protein in 2013, announced it was spinning off its active nutrition business, including Premier Protein, PowerBar, Supreme Protein and Joint Juice (which are all managed by Premier Nutrition Corporation) and supplement brand Dymatize, selling 20% of its ownership stake. In September, the spinoff company, named BellRing Brands, filed for an initial public offering, and raised $516.4 million in net proceeds from the IPO in October.

Premier Protein, which also offers protein bars and powders, is currently the leader in the shelf-stable “weight control” beverage category, populated by brands such as Ensure and Muscle Milk, according to market research firm IRI. As of December, this category had grown 4.4% from the previous year, while Premier Protein’s sales volume was up 13.5% over the same period.

“We’re really in a position to invest in the brand for growth,” she said. “You’re going to start to see increased marketing support this year as we really want to fixate on the business.” 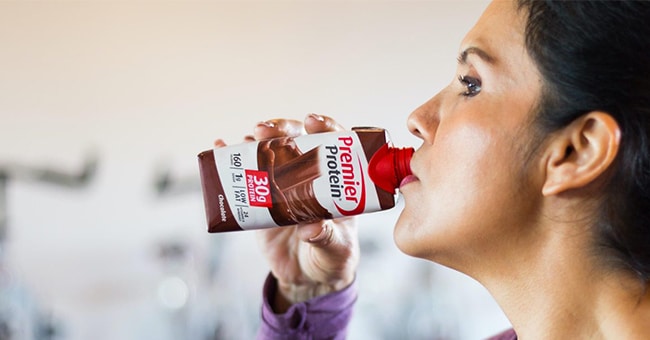 The new “Feel Great About Great Taste” marketing campaign broadcasts the brand to a wider audience while remaining constant in its goal to “help consumers maintain their health or improve it,” said Greenberg, relying on testimonials to make consumers the “centerpiece of the campaign.” It spans across broadcast and cable television, YouTube and Hulu, and will also include Instagram contests, influencer collaborations, an Amazon partnership and exclusive media placement on health-focused websites such as WebMD and Healthline.

Over the years, the brand has aimed for a wider consumer base by aligning itself as a brand focused more broadly on health, said Greenberg, and as such doesn’t directly associate itself with physical activity or other specific use occasions. She said consumers use it both as a snack and breakfast or lunch meal replacement, as well as before and after workouts. Throughout Premier Protein’s time on the market, she said, she’s also seen consumers’ perceptions of health shift from a focus on “weight and fitness” to a broader approach more focused on a general wellness and preventing future health issues. 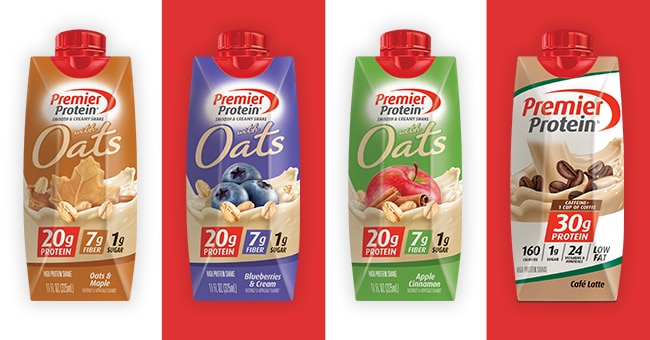 Premier Protein’s strategy is to maintain and grow its base avoiding “flavor fatigue,” and expanding to different use occasions, especially because its shakes are a “habitual” product, Greenberg said. Late last year, the brand rolled out its new Café Latte protein shake, Premier Protein’s first caffeinated offering, in Walmart and several other retailers, and it will be expanding nationwide in March with retailers such as Target. She said the flavor, which was highly requested by consumers, is already its third best-selling shake variety in Walmart. The brand is also launching a three-SKU Protein Shake with Oats line, a breakfast shake with “more balanced nutritionals” containing 7 grams of fiber and 20 grams of protein, hitting retailers in April.

The flavor innovations come as the protein shake category is changing in a key way as brands adapt to consumers’ prioritization of products’ ingredient sourcing. This includes brands Premier Protein’s shakes often share the retail shelf with: Iconic Protein highlights the “grass-fed” ingredients of its protein shakes, while Orgain now offers a line of plant-based protein shakes. Other emerging players such as shake brands OWYN and Koia and millennial-aligned Apres are also looking to shift the protein beverage category with their use of plant protein.

Greenberg said Premier Protein has found that consumers care most about understanding the products’ macronutrients, so the packaging of its protein shake line advertises that it contains 30 grams of protein, 1 gram of sugar and 160 calories. She said the brand uses milk-based whey protein because it “delivers nutrition that consumers want– that high level of protein.” She also added that whey protein is a complete protein, containing nine essential amino acids, while also delivering a “taste that consumers expect.”

“We’re very clearly communicating the great nutritionals,” Greenberg said. “That profile of 30 grams of protein is a lot of protein, and it’s hard to deliver that in plant-based and have it still taste acceptable.”

However, the company hasn’t ruled out a product formulated with plant-based protein, she said, and its research and development team “continues to monitor” other protein sources.

“For us, the most important thing is that we can deliver that high level of protein with a great taste,” she said. “When we find protein sources that can help deliver that, that is our criteria for moving forward with it.”

She said the brand has also largely steered clear of aligning itself with particular diet trends such as keto and paleo in an “outright way,” and it doesn’t consider itself a diet brand, though she said there has been “some communication around our appropriateness for the keto diet.”

In the year ahead, the brand is looking forward to evaluating how its new marketing campaign performs with consumers, and Greenberg said if it’s successful in expanding the brand’s consumer base, they’ll “continue to invest in building the business that way.” Ultimately, she said, the goal with the marketing push and new product lines is to help consumers either start or stay consistent with their “health journey” and understand the role Premier Protein products can play in this.

“We want to make sure we’re communicating in a way that consumers feel like it’s for them,” she said.