The Company is pleased to announce that the final report for the Induced Polarization (IP), Magnetics (Mag) and VLF-Electromagnetics (VLF) surveys conducted on its Kwai Property in the Red Lake District has been completed and received by Golden Goliath. This work has been described in a previous news release dated August 27, 2019.

Lithoprobe seismic traverses of the Red Lake Camp have revealed that deep seated structures are associated with the main 3 mines and there are two to three more similar faults in the camp on the south side of the belt on both the Great Bear Dixie and Golden Goliath Kwai Property as shown below: 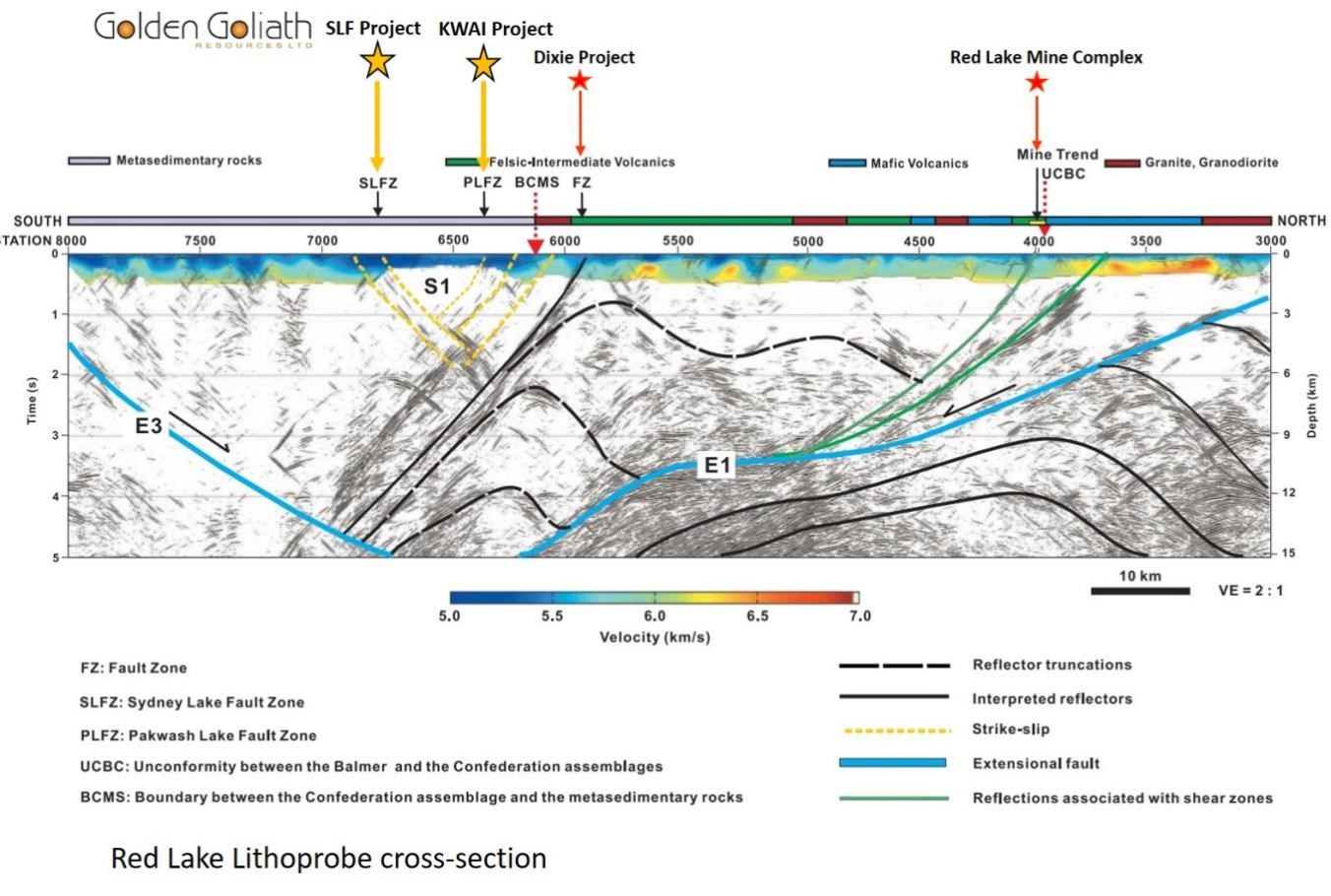 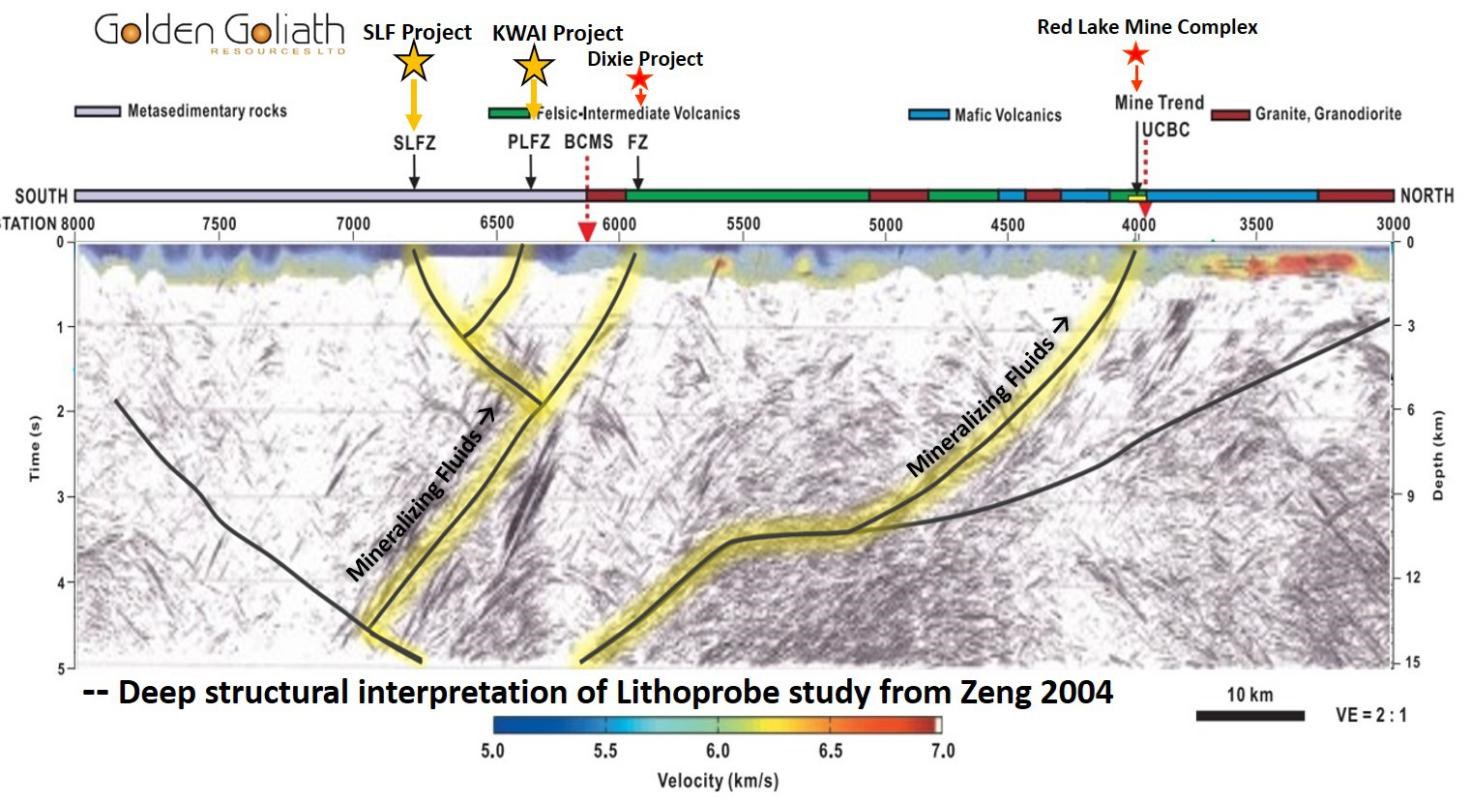 The ground surveys were conducted by Exsics Exploration under the supervision of J. C. Grant, CET, FGAC with additional interpretation by Robert Middleton B.Sc., M.Sc., P.Eng. The field data collection for these surveys was completed between the 26th of June and July 30th 2019. The survey has traced number of shear zones that follow the contact of the Pakwash Fault with the sediments and volcanics creating ideal sites for gold mineralization. Similar shears occur on the Dixie Lake property to the north presently being drilled by Great Bear Resources.

Two separate grids (West Grid and East Grid) were cut for these surveys, each covering the favourable fault structures where cross cutting structures appear to be present. . Of the 9 km section of the targeted Pakwash Fault Zone that crosses the property, only 1.5 km was covered by the surveys. See Fig 4

In all, a total of 18.25 kilometers of grid lines were cut with 25 meter stations across the claim block. Once the cutting was completed both of the grids were then covered by an Induced Polarization, (IP), survey along with a Total Field Magnetic survey and a VLF-EM survey. 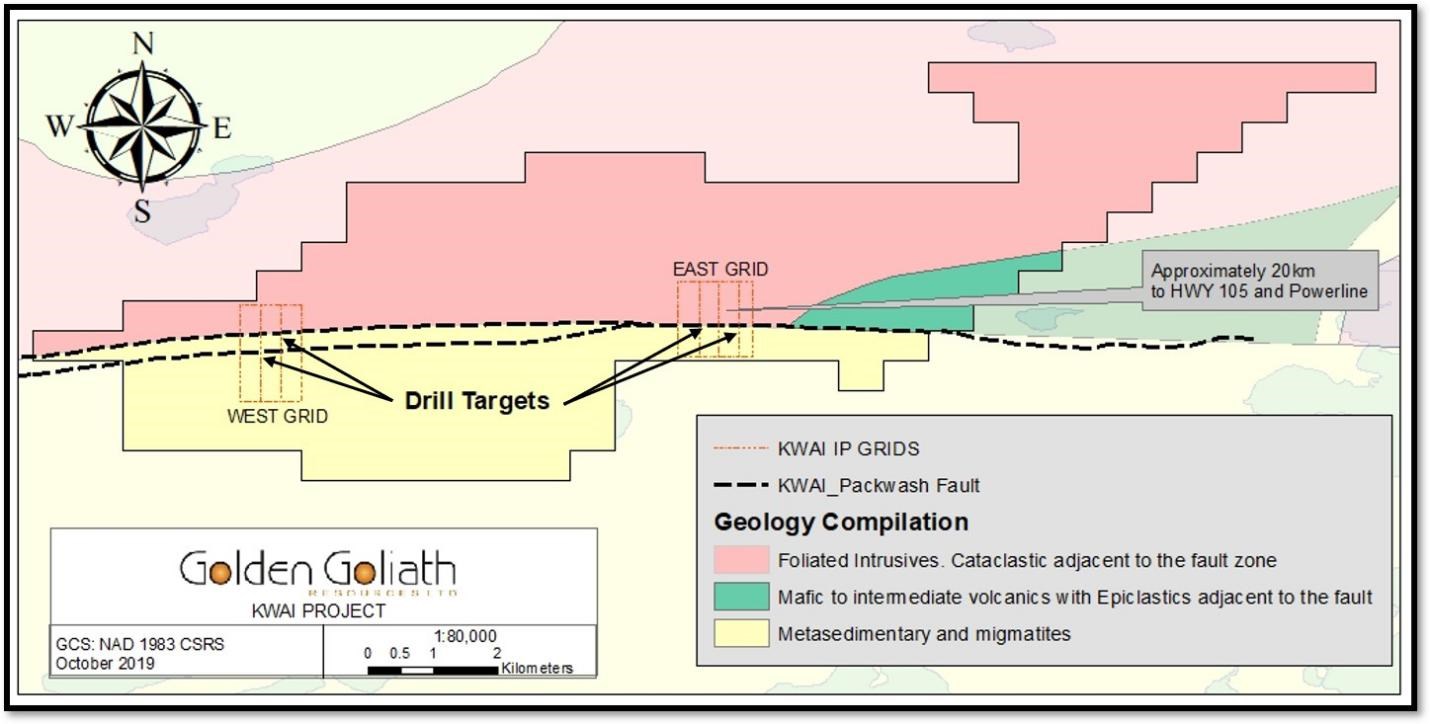 The Company is very pleased with the results of the geophysical survey work.

Multiple moderate to strong chargeability anomalies were detected by the Induced Polarization survey from which high priority drill targets have been identified by Robert Middleton, P.Eng.

The high chargeability anomalies associated with the trace of the Pakwash Lake Fault remain untested and the anomalies occur in a low area where there is scarce to no outcrop. On the East grid local intense epidote alteration was observed with traces of pyrite and chalcopyrite, possibly akin to base metal alteration zones.

The MAG and VLF-EM surveys were done to define magnetic depletion zones caused by cross faults and alteration and helped trace the deep-seated fault structures that link to the contacts seen in the resistivity data.

The summer work program on the Kwai property included ground follow up of the anomaly areas and due to overburden cover these targets must be tested by diamond drilling.

The following summary of results is derived directly from Mr. Grant’s report:

“The IP survey was successful in outlining several areas of interest across the survey portion of the two grids. The main IP target areas on both of the two grids appear to correlate to the suspected main fault zone, the Pakwash Lake Fault that is known to strike across the region from the West grid to the East grid. (Figure 4). The fault represents the contact or suspected contact between the Intrusives and volcanics to the north and the metasediments to the south. Both of the two grids were designed to cross cut the suspected fault location with the intent of testing the fault for an environment that would be considered a good area for deposition of gold bearing materials. Parallel shear zones were identified by the IP which are also recommended for drilling.”

“When comparing the results over the two grids it was suggested that the features may be representing two major shear zones that strike across the entire area. Shears are the main controlling structures for gold in the Red Lake mines area as well as the newly discovered Great Bear Resources, Dixie Lake project directly to the north of the Golden Goliath, Kwai property. “

“The Author has also seen similar IP responses over the Bell Creek Mine which is an operating gold mine in the Timmins Gold camp.

The most intriguing part of this initial ground program is that initially we did not know what to expect for results as there had been very little historical work programs done in the area. The fact that the initial results are so similar in nature to historical results in both the Red Lake and Timmins camp may suggest that the potential for similar structures may exist on the Golden Goliath, Kwai Property which we have just started to explore. ”

“I would suggest that although we have potential drill targets from these initial surveys they may not represent the best targets across the property. A follow up in fill program of additional IP surveys between the two initial grids and east and west to the property boundaries along with detailed magnetics would greatly improve the classification of anomalies for the initial drill program. The Dixie Property to the north has proven the existence of new gold structures that correlate to major shear and or fault structures in the area. Great Bear has raised significant funds to further drill their new discovery which can only help in the understanding of the potential of the Kwai Project as it progresses. ” (Great Bear Press Release, November 7, 2019)

Golden Goliath retained a well known, independent Geophysical Engineer, Robert Middelton, B.Sc., M.Sc., P.Eng., who discovered the Bell Creek Mine in Timmins in 1979. His mandate was to examine the geophysical data and give his own interpretation and recommendations. Middletonʻs report stated:

“The Induced polarization survey of the Kwai Property in Red Lake has traced two major shear Zones across the length of the grid for a 1.6 km distance and drill holes at selected intervals will attempt to determine the presence of gold mineralization. Shears are the main controlling structures for gold in the Red Lake Camp both at the Goldcorp Red Lake Mine (former Arthur White Mine) and on new discoveries such as the Great Bear Dixie Lake project immediately north to the Golden Goliath Kwai property.”

“In some cases the low resistivity units are associated with negative chargeability suggesting conductors which would be sheared argillitic sediments with some graphite, however since those sediments are sheared, the contact with the basalts can also be sheared creating an excellent host for gold mineralization (carbonate-sericite zones).”

“The high chargeability zones are likely caused either by disseminated sulphides which could be surrounding gold mineralization or caused by pyrite in graphitic zones adjacent to carbonate alteration zones. Proper cross section drill holes are presented here to be certain the whole structure is tested to hit all aspects of the “Contact ” area and hit both the potential carbonate zones as well as the potential volcanics and any sediments. Such a setting occurs on the Dixie Lake Property now held by Great Bear Resources north of the Golden Goliath claims where a sharp contact of basalt and sheared sericite schists demarks a gold bearing zone (See Great Bear Resources web site for maps).”

“You are in virgin territory with the potential of a whole new type of discovery here. The gold bearing fluids are in the area and just need the right structure to channel them.”

The objective of the program this season was to identify and locate major fault structures that were postulated to cross the Kwai property. The geophysical program launched in the summer was highly successful in meeting this objective. Although surface evidence of potential mineralization was not found, the geophysical evidence is compelling proof of valid targets associated with the fault zones that will need to be diamond drill tested. Financing options are now being investigated to achieve this goal and discussions with drilling and geophysics contractors have been initiated.

Golden Goliath Resources Ltd. is a junior exploration company listed on the TSX Venture Exchange (symbol GNG). The Qualified Person (“QP”)for the information regarding Ontario properties is J. Paul Sorbara M.Sc., P.Geo. The QP has approved the scientific and technical disclosure in the news release.

The Company is focused on exploring and developing the gold and silver potential of properties in the Red Lake District of Ontario. The Company also holds a 100% interest in the San Timoteo property, located in the Sierra Madre Occidental Mountains of northwestern Mexico, as well as NSR royalties on several other nearby properties, and 100% of the La Cruz property, also in Chihuahua.

To find out more about Golden Goliath visit our website at www.goldengoliath.com.