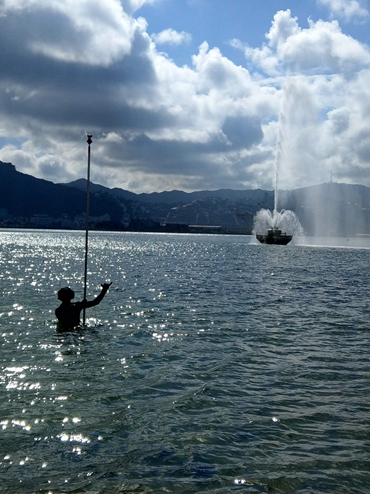 News from Cuttriss
The Wellington City Council has completed its bi-annual Oriental Bay beach survey to ensure the sand remains at optimal levels for Wellington beach goers over summer.

The iconic and award-winning beach on the edge of Wellington Harbour was man made in 2004, when the Council shipped in 22,000 tonnes of sand from Golden Bay.

“Because Oriental Bay is an artificial beach, WCC need to keep close tabs on how much the sand moves and we have a comprehensive programme in place to manage this,” says Peter Hemsley, Project Manager, Marine and Coastal, WCC.

Cuttriss Consultants undertake topographical field surveys of the sand in April and September each year, working closely with Tonkin + Taylor, the original coastal and civil designers of the beach who manage the annual monitoring and maintenance schedule for the WCC.

Oriental Bay is a popular beach in summer with swimmers, families, and fitness fanatics. Without monitoring and regular sand shifting, sand would accumulate at the western end of the beach and spill out into the harbour where it would be lost. Regular monitoring also allows the teams to identify and address potential hazards such as the condition of the beach structures and performance of the stormwater outfalls.

“The beach orientation in the harbour means that wave action causes longshore sand drift along the beach from east to west. As the beaches are artificial, there is no sand further around the coast to naturally replenish the eastern end of the beach. Monitoring allows us to assess how much sand has accumulated at the headland, and to identify the volume of sand that needs to be relocated back to the eastern end of the beach. It also allows us to track the long term trends of sand movement, and assess the future maintenance requirements for Council,” says James Moore, Tonkin +Taylor.

Cuttriss surveyors undertake the bi-annual survey work to record the beach profile and to confirm the volume of sand to be relocated. When processing this data, surveyors plot the elevations of the sand from their measurements to build a 3D model of the beach. This information is also used to see how much the sand has moved compared with previous years.

Rachel Charlesworth, Graduate Surveyor at Cuttriss Consultants, says the topographical sand measurements are not just undertaken on the sandy beach.

“We’ve carried out this monitoring since 2004 and our surveyor, Jeff Macphail, has to swim out quite far towards the fountain to get measurements, positioning a pole along section lines. The fieldwork on this job requires great communication and teamwork and we end up having a lot of fun while doing it,” says Rachel Charlesworth.

The WCC project, to enlarge the beach areas of Oriental Bay and to develop the Freyberg Beach grass area with a modern playground, has won numerous awards including The Supreme Award – New Zealand Institute of Landscape and Architects.

Celebrating 70 years in the industry, Cuttriss Consultants are leading experts in land surveying, civil engineering and resource management planning in New Zealand. Working with a range of stakeholders, including; business owners, developers, local Councils, central government agencies and local Iwi, Cuttriss Consultants take pride in creating thoughtful, socially and environmentally conscious spaces. At the forefront of significant projects including the Aotea and Waikanae North housing subdivisions, as well as the relocation of Saint Patrick’s / Our Lady of Kapiti School. Cuttriss is working to build mutually beneficial relationships with our local communities.