Editor’s note: Seeking Alpha is proud to welcome The Sports Investor as a new contributor. It’s easy to become a Seeking Alpha contributor and earn money for your best investment ideas. Active contributors also get free access to SA PREMIUM. Click here to find out more »

Editor’s note: Seeking Alpha is proud to welcome The Sports Investor as a new contributor. It’s easy to become a Seeking Alpha contributor and earn money for your best investment ideas. Active contributors also get free access to SA PREMIUM. Click here to find out more »

Manchester United (MANU) has underperformed on the field since the departure of the legendary manager Sir Alex Ferguson in 2013. United’s on-field performance is expected to finally hurt the top-line and overall profitability. The stock price target for MANU is $12.65 vs. the current $16.67 price. It is recommended to sell and/or short the stock.

How poorly has United performed since Ferguson retired? As stated best by former goalkeeper Anders Lindegaard, “United has been trying to charge an iPhone with a Nokia charger since Sir Alex Ferguson left.” The club has managed only two top-four finishes and has no Premier League titles since Ferguson’s departure. There have been lackluster statistics from one of the largest sports clubs in the world (if not the largest). United is currently holding down 7th place in the Premier League. 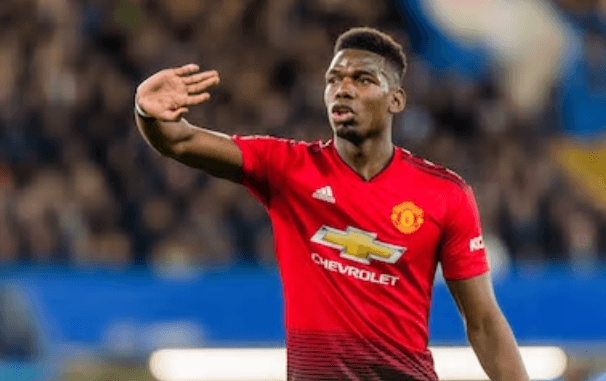 Until now, lackluster on-field performance has not significantly affected the club’s growth trajectory. Total revenues grew by 58% between the 2015/2016 and 2018/2019 seasons. The growth drivers have been broadcasting agreement improvements and increased commercial sales (jersey sales, eSports, sponsorship agreements, etc.). 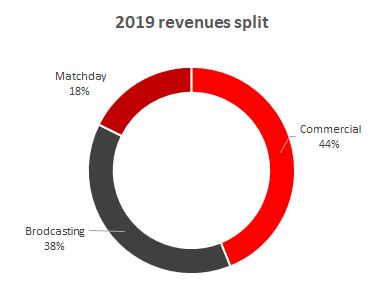 During the fourth-quarter investor call, the club warned that revenues were set to drop to £560m-£580m this season, down from £627m last season. This analysis expects £567m in revenues for the 2019/2020 season. The club’s failure to qualify for the Champions League, and its current involvement in the less popular and less profitable Europa League, will drive a £60.5m drop in revenue. Last year, the club earned £82.6m in Champions League broadcasting revenue vs. expected £22.1m in revenue from Europa League. It is expected that United will reach the semifinals of the competition. 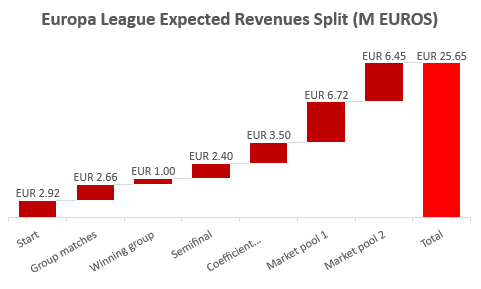 Additionally, United is risking a 30% drop in revenue from its kit sponsor deal with Adidas, worth £75m annually. The agreement will devalue if the club does not qualify for next year’s Champions League. In order to qualify, United will have to either place within the top four of the Premier League or win the Europa League. Both scenarios are unlikely considering the team’s current performance. The effect of the revenue drop will not be felt before the 2020/2021 season; however, it will, without a doubt, have an overall adverse effect on the stock price. 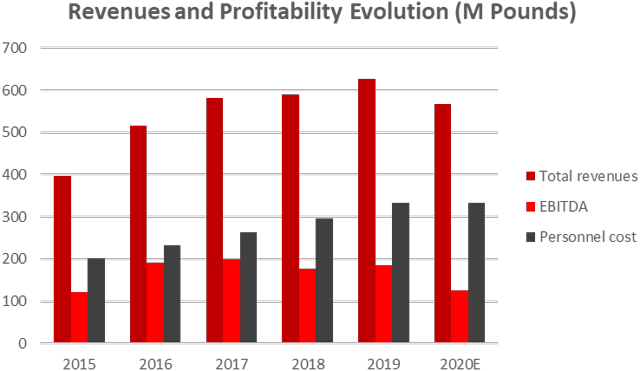 During the fourth-quarter 2019 investor call, the club also warned that EBTIDA is projected to decrease to £155m-£165m for the 2019/2020 season, down from £186m last season. This analysis expects £125m EBITDA for the season as it is not likely that the club will cut costs in order to uphold profitability. As noted above, United is currently in 7th place in the Premier League, and the only significant cost-cutting measure the club can implement swiftly is to reduce personnel costs. This could be implemented by selling players or by lending players to other clubs (personnel costs were 53% of revenues last season and are expected to be 59% of revenues this season). 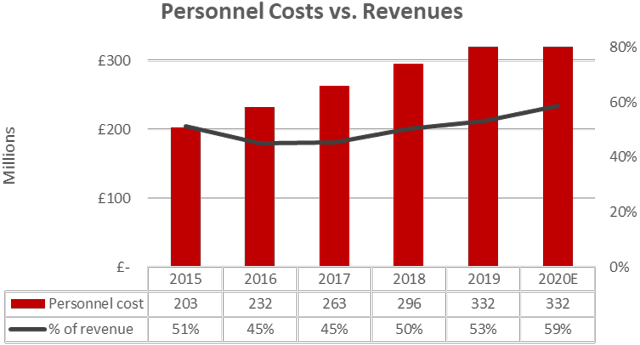 If anything, player salaries may increase this season as United is forced to sign star players during the winter transfer window in order to improve its on-field performance. The team needs a forward, which will not come cheap. The club got rid of Lukaku and Sanchez before the season, which may counterweight the salary costs of any new signings. It is therefore reasonable to believe that overall operational costs will be the same this season as last season. 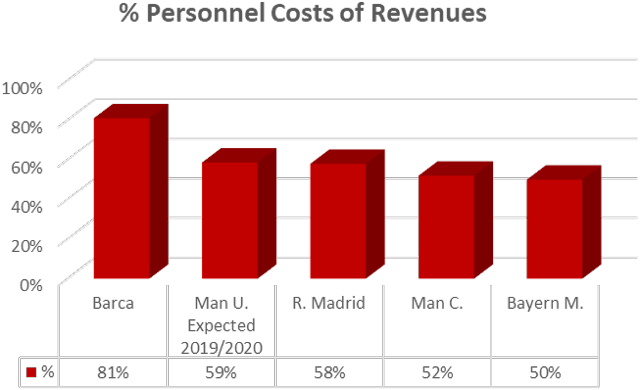 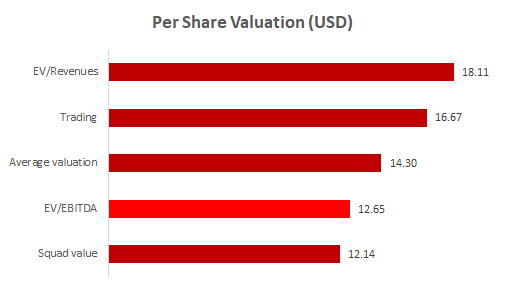 EV/revenues: The utilized peer multiplier has been derived from KPMG’s annual football club valuation analysis, issued May 2019. The multiplier has been adjusted for factors such as club size, profitability, sporting potential, broadcasting rights, and stadium ownership. The 4.69x multiplier produces an overall EV of £2 656m and a stock price target of $18.11. This target conveys a fair valuation of the MANU stock.

EV/EBITDA: The EV/EBITDA multiple utilized in order to set the target stock price corresponds to the above mentioned EV/revenues multiple. The methodology takes into consideration the expected dramatic decrease in operational profitability this season. The 15.64x EBITDA multiplier utilized results in an overall EV of £1 959m and a stock price target of $12.65. The MANU stock is perceived to be highly overpriced and is a clear candidate for a short trade.

Squad value: KPMG applied a linear regression between squad values and Enterprise Values for the 32 largest clubs in Europe. The analysis can be utilized in order to value a club on EV level. The aggregate player value might capture total club value through the link between player values, on-field performance, and economical success. Multiplying United’s squad value of £678m from Transfermarkt by a 2.5x multiplier, and adding a £200m intersect value results in an overall EV of £1 895m. This corresponds to a $12.14 stock price target and validates our final stock price target of $12.65. 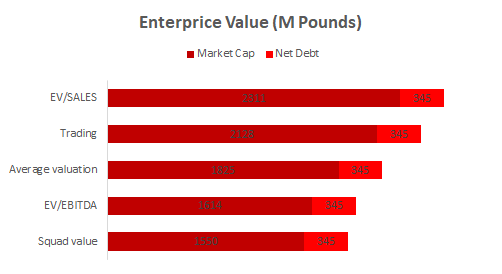 Everything discussed here suggests that MANU is overvalued. One might therefore consider shorting the shares in order to profit from its expected decline. If you are an individual investor, this could be implemented by going short a MANU CFD through your online trading portal.

Disclosure: I/we have no positions in any stocks mentioned, and no plans to initiate any positions within the next 72 hours. I wrote this article myself, and it expresses my own opinions. I am not receiving compensation for it (other than from Seeking Alpha). I have no business relationship with any company whose stock is mentioned in this article.